The Henry L. Stimson Center, in conjunction with the Collaborative for Student Success, released a new report, “The Army Goes to School – the Connection between K-12 Education Standards and the Military Base Economy.” The report finds that, due to gaps in education standards around the country, soldiers facing moves to new school systems cannot be certain that the standards from a school in one state will set their child up for success in a new state.

“Soldiers expect a certain level of care for their families as part of their service to our country – and that care must now include education. As Servicemembers and their families move from post to post, they deserve a guarantee their children are receiving a standard of education that will prepare them for their futures,” says Jim Cowen, director of military outreach at the Collaborative for Student Success. “Fortunately, a majority of states have adopted the Common Core State Standards as a way of ensuring that their students are receiving the same rigorous level of education.”

K-12 education has caught the attention of Army leadership as a key retention issue because of the damaging impact that low or inconsistent standards have on the families of Service members. So much so that Gen. Ray Odierno, the outgoing Army Chief of Staff, has warned that the performance of local schools will be a major consideration of the service in the placement of Army units around the country. With many military host communities dependent on Army bases for a majority of their revenue, this is an issue that that states cannot ignore.

“Standards that are rigorous and consistent across states – like the Common Core – are the only way to guarantee that students moving from coast to coast will be academically ready to enter their next school,” says Amy Zink, former military spouse and education advocate. “States cannot take this issue lightly – Service members and their families deserve the highest standards in all aspects of their lives.” 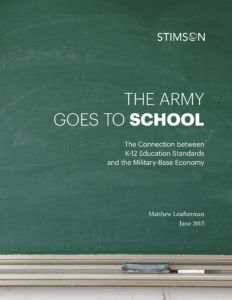