California’s New Common Core-Aligned Test Results Will Be Low, but for Good Reason 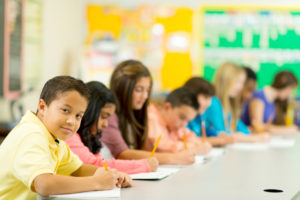 Previewing upcoming test results from new Common Core-aligned assessments, columnist Nan Austin writes in the Modesto Bee that new state assessment results for California students are expected to be much lower than in past years. Austin explains why this news is not cause for concern:

“The new scores have no relation to scores under the old testing system. First off the scores go from 200 to 3000, where the old measures stopped at 600… More importantly, kids are tested in a fundamentally different way, on different standards, meant to be taught differently.”

As a statement released earlier by The National Association of System Heads, the State Higher Education Executive Officer Association, and Higher Ed for Higher Standards, points out:

“Because the assessments have been purposefully pegged to a higher standard than previous state tests – a college- and career-ready standard – we expect the initial scores to be lower than what students, families and educators are used to…This should not be cause for alarm nor an indictment of our K-12 educators.”

Although scores in many states will go down initially, students who took these new assessments are now on track to becoming better prepared academically for life after high school. This year’s results are a new baseline, and we know from looking at states that have already gone through this process, that test scores will continue to improve every year as students are held to higher standards.
Read the full Modesto Bee article here: http://www.modbee.com/news/local/education/nan-austin/article26695207.html