On June 13, 2016, Jim Cowen, Interim Executive Director of the Collaborative for Student Success, released the following memo in response to the release of ACT’s National Curriculum Survey:

Last week ACT released the results of its latest National Curriculum Survey, a periodic poll of K-12 and college educators. The report suggests big discrepancies between the skills and abilities emphasized by the Common Core State Standards and those college instructors consider most important for success after high school.

Such allegations make for jarring headlines, but are they accurate? A closer look at the survey, the research and the motivations behind it, as well as the evidence from the states, suggest the findings offer little more than fodder for opponents still bent on seeing the demise of the Common Core.

While not supported by the survey results, ACT’s study claims that early elementary teachers are not adhering to the Common Core because they think students will be less prepared otherwise. However, a 2016 report by the RAND Corporation indicates that an alternative explanation is gaps in understanding of the standards. Teachers are in need of greater professional development so that they can develop high-quality instructional materials aligned with standards. Thus, the gap in instruction should be attributed to sub-par professional support and weak implementation efforts, not the standards themselves.

ACT’s analysis that college instructors see less value in certain areas of emphasis within the Common Core, like analyzing source texts and using evidence to support an author’s claims, ignores the great deal of scholarly research that shows such learning is critical to reading comprehension and acquisition of literacy skills. Additionally, many studies have praised the Common Core for making a big improvement on most states’ former academic standards.

The motivation behind the ACT study also warrant’s examination. At the end of the day, ACT has a business interest to protect, and the testing market is getting more crowded and competitive.  Currently only three states use the ACT Aspire test, and only three states require the ACT as the only high school test.

Some have criticized ACT’s own lackluster record for measuring student preparedness. While ACT has long been used to measure college-readiness, remediation rates in the U.S. remain remarkably high. Thirty-six percent of recent high school graduates require remediation. Those rates are even higher among minorities; 56 percent of African Americans and 45 percent of Latinos require remediation before they can begin credit-bearing coursework.

Meanwhile, study after study has confirmed the strength of tests specifically designed to the Common Core. Research by the Thomas B. Fordham Institute, the Human Resources Research Organization, the National Network of State Teachers of the Year and Mathematica Policy Research all identify consortia exams for their ability to accurately measure student readiness based on college and career readiness. In several cases, those studies specifically indicate the consortia tests outperform the ACT exam.

But what may be most telling is the success of states leading implementation efforts.

Take Tennessee, which was an early adopter of the Common Core and put a great deal of support behind implementation efforts. The state’s percentage of college-bound students requiring remediation has fallen consecutively over the past four years, from 77 percent in 2011 to 63 percent in 2015. In 2014 Tennessee made the largest improvement in college-readiness rates in more than a decade.

“The hard work of teachers to implement higher academic standards is having an impact,” the state’s education commissioner said of the gains.

By contrast, states that sought to appease critics by promising new, superior education standards have demonstrated such exercises invariably result in either a “rebranding” of the Common Core, or inferior academic expectations. The most glaring example is Oklahoma, which after subjecting its schools to no fewer than three sets of education standards, ended up with learning goals that lacked the quality and clarity of the Common Core.

An independent analysis that compared Oklahoma’s resulting education standards to those of 25 other states concluded: “In both content areas the standards fail to serve students, teachers or parents well…[and] will fail to adequately prepare Oklahoma student for postsecondary success…Worst of all, these standards will disadvantage Oklahoma students compared to their peers in other states; students in Oklahoma will be less prepared to successfully enter college and careers.”

The Common Core State Standards were developed by educators and experts from across the country with the goal of helping more students graduate high school fully prepared for college or a career. As such, they are built on the best evidence of what students need to know and be able to reach that point. And teachers, business leaders and specialists continue to give the standards high marks for setting clear, rigorous learning goals that create a path leading straight to college or a good job.

State leaders now have a choice: They can go the way of Oklahoma and revert back to inferior learning goals, or they can continue to refine and build on the Common Core framework—exactly as the standards were designed. But the fact remains, it is impossible to produce a set of education standards that fully prepare students for college and careers and that look nothing like the Common Core. 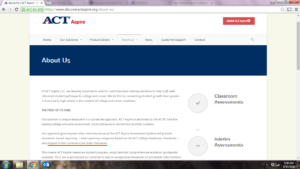 In the end, ACT’s position on the Common Core State Standards remains confusing. On its own website, ACT claims its test is aligned to the Common Core. Yet ACT has taken several steps recently to distance itself from and criticize the standards. States that decide to use the ACT Aspire test or use ACT for their high school test should demand a straight answer on this question.