In a letter to the Oklahoman, Darice Keating, president of ACT Aspire, writes, “College and career readiness and Common Core State Standards are not the same.” Keating goes further to suggest that unlike consortia tests, “ACT Aspire assessments provide the essential information to help get and keep students on the path toward readiness without wasting their time.” The argument implies Common Core State Standards, and by extension the assessments aligned to them, do not adequately prepare students for college and careers.

Contrary to Keating’s claims, ACT’s own 2014 Condition of College Readiness Report stated, “ACT continues in its steadfast support of the purpose and intent of the Common Core State Standards, which focus on the key essential standards that can prepare students for college and career success.”

And as of March 4, 2016,  ACT Aspire’s “About Us” on their own website proudly notes how their assessment measures college- and career-readiness and is aligned to the Common Core State Standards: 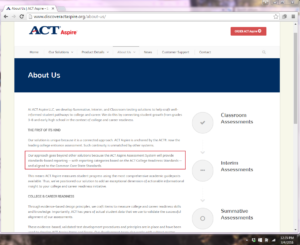 The Fordham Institute study Keating references evaluated how well four tests—ACT Aspire, Massachusetts’ MCAS, PARCC and Smarter Balanced—align to the Common Core State Standards. The results indicate that while all tests performed well, PARCC and Smarter Balanced had the strongest matches to the core content of the standards. “They are, in fact, the kind of tests that many teachers have asked state officials to build for years,” the analysis notes.

It seems as though ACT has only recently changed their mind about the Common Core State Standards as a measure of College and Career Readiness as research shows its exams are not up to par. ACT presents no independent research that they have accurately identified the only essential college and career ready skills worth measuring. It is also noteworthy as ACT reports that “fully 31% of the ACT-tested graduating class are not meeting any of the Benchmarks, which will make it difficult for them in their post–high school experiences.” If over one-third of students are not meeting these benchmarks perhaps it is possible they need to be revisited for their alignment to what is being taught in our nation’s schools.

Common Core State Standards were developed for the very purpose of setting high, consistent learning goals that provide a path of college- and career-readiness. A 2012 report by the Association for Supervision and Curriculum Development notes: “Perhaps the most significant difference [between Common Core Standards and those states used before] is that the new standards were explicitly designed around the goal of ensuring college and career readiness for all students.”

Recognizing the old patchwork of education standards created huge discrepancies in academic expectations from state to state and even district to district, educators and experts from across the country worked together to write what would become the Common Core State Standards. Their work was informed by the best evidence of the skills and knowledge students need in order to get and stay on a path of college- and career-readiness.

The official Common Core website notes: “The Common Core is informed by the highest, most effective standards from states across the United States and countries around the world. The standards define the knowledge and skills students should gain throughout their K-12 education in order to graduate high school prepared to succeed in entry-level careers, introductory academic college courses, and workforce training programs.”

In her letter, Keating seems to applaud Oklahoma’s decision to repeal the Common Core. However, a white paper by the Collaborative for Student Success notes the state’s decision to replace its Common Core State Standards has set schools “on a rocky path of disruption, uncertainty and internal turmoil.”

The white paper concludes: “For leaders still considering the future of high, consistent academic standards and related assessments in their states, Oklahoma should serve as a cautionary tale. While other states are working to provide parents and teachers with better tools to measure student development toward college- and career-readiness, the future for Oklahoma’s academic standards—and its students—is less certain.”