Education Next Poll: Strong Support for High Standards, Not Labels

Education Next’s annual public opinion survey confirms what we’ve long suspected: it’s time to stop fighting about the words “Common Core” and move forward. While the Common Core brand has again fallen in popularity – even though now as many people support it as oppose it – the public overwhelmingly supports rigorous, comparable academic expectations, no matter how they are described. And most states are using the Common Core framework to deliver exactly that—a high baseline of academic expectations that prepare young people for college and careers. If anything, the poll results confirm that support for the Common Core brand would be high, if not for the politics and misperceptions governing the dialogue about academic standards. 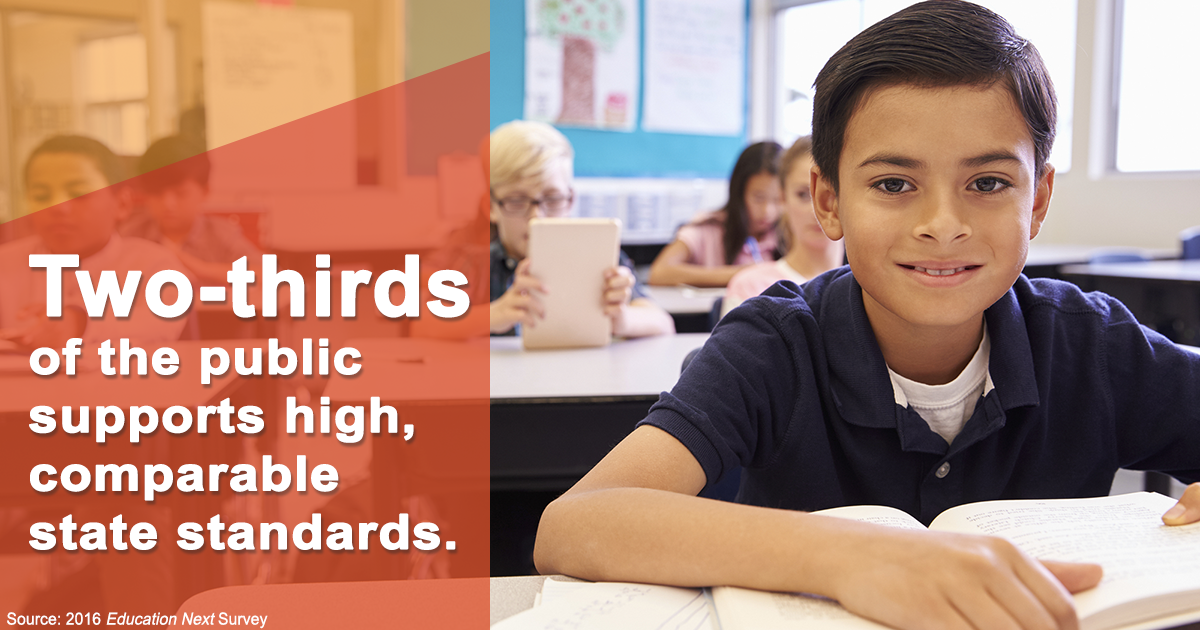 Common Core State Standards were developed and voluntarily adopted by states to raise expectations for student achievement. Now, six years in, most are making good on that pledge. Of the 45 states that initially adopted the Common Core, nearly all continue to implement high standards that are comparable across states. Many states have launched reviews and modified the learning goals to ensure they meet their unique state context and students’ needs. And that fits with the original intent of the Common Core, which was always meant to set a floor, not a ceiling, for academic progress. Many, if not most, of these reviews were undertaken for political reasons, and not because of genuine issues with the substance of the Common Core.

As I noted this spring, zero states passed a full-scale repeal of the Common Core in last year’s legislative sessions. That marks the second consecutive year in which state policymakers refused to bend to the small but vocal subset of critics intent on returning to inferior models of education. As Politico reported nearly a year ago, Common Core “has become the reality on the ground for roughly 40 million students – or about four out of every five public school kids.”

How are state leaders able to bridge their commitment to the rigorous education standards with public opinion? Simple. As the Education Next poll (and nearly every other poll like it) reaffirms, teachers and the public remain firmly committed to high, comparable academic standards that fully prepare students for college and careers—no matter what label is attached. A full two-thirds of respondents favor college and career ready standards that are consistent from state to state and school district to school district, and when no label was attached, support for high standards increased compared to previous years.

States that have not wavered in their belief that rigorous classroom expectations matched with high-quality assessments will improve student outcomes are now seeing the rewards of their perseverance. Now in the second year of administering exams aligned to high standards, states that have put strong support behind implementation and stuck with honest assessments are beginning to see improved proficiency rates – which tell us that more students are on track to be ready for college. An analysis by the Collaborative identifies seven such states, and as results continue to trickle in, that reality is reinforced further.

Conversely, the few states that caved to political pressure and sought to develop “superior” education standards (Indiana, Oklahoma and South Carolina) have proven that such efforts invariably produce learning goals either nearly identical to or, in the case of Oklahoma, inferior to those they were meant to replace. Sadly, in doing so, those states have also subjected students and teachers to disruption and uncertainty that only further impairs the learning process and student growth. 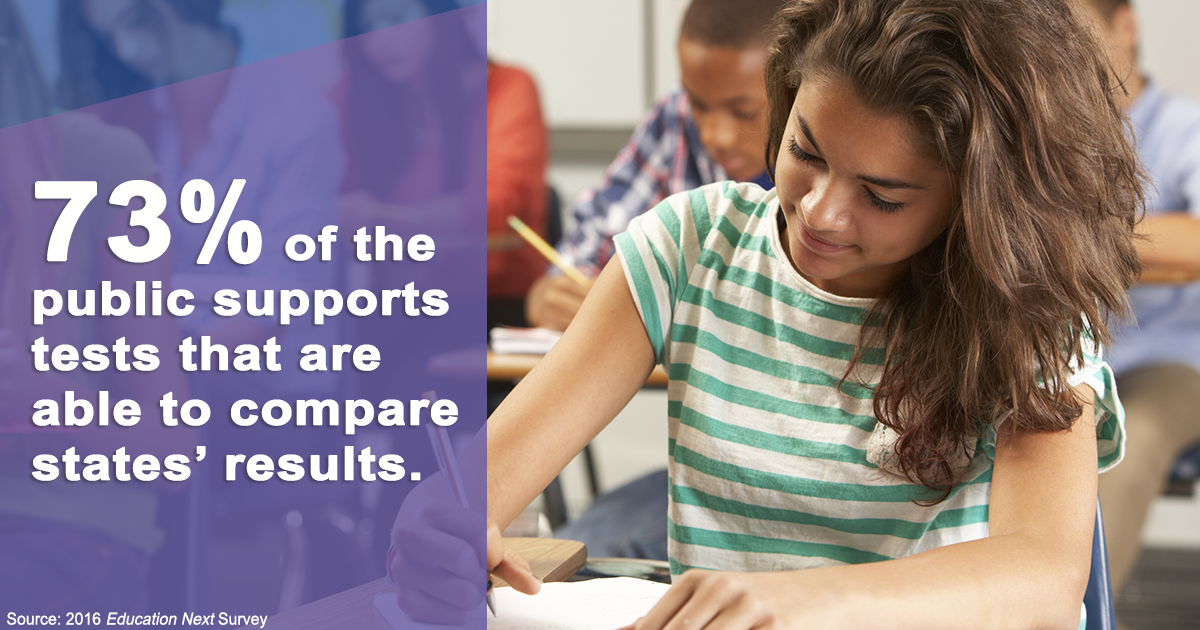 The Education Next poll reiterates that parents continue to strongly support high-quality assessments that accurately measure their children’s development. Nearly four out of five respondents favor yearly assessments, and a full 73 percent support assessments that are comparable among states and school districts – something that is not truly possible without comparable standards. Those numbers offer a strong rebuke to interest groups that continue to pressure parents to “opt out” and should serve as a reminder to policymakers who seek to appease those factions.

States that have “gone it alone” on student assessments by pursuing independent or state-specific tests have incurred significant costs and disruptions and, in all likelihood, will end up with inferior exams. As I wrote before, seeking to placate opponents by sacrificing assessments aligned to rigorous learning goals has proven a poor, and costly, decision. And, as the polls continue to point out, it is a losing strategy to win favor with constituents. 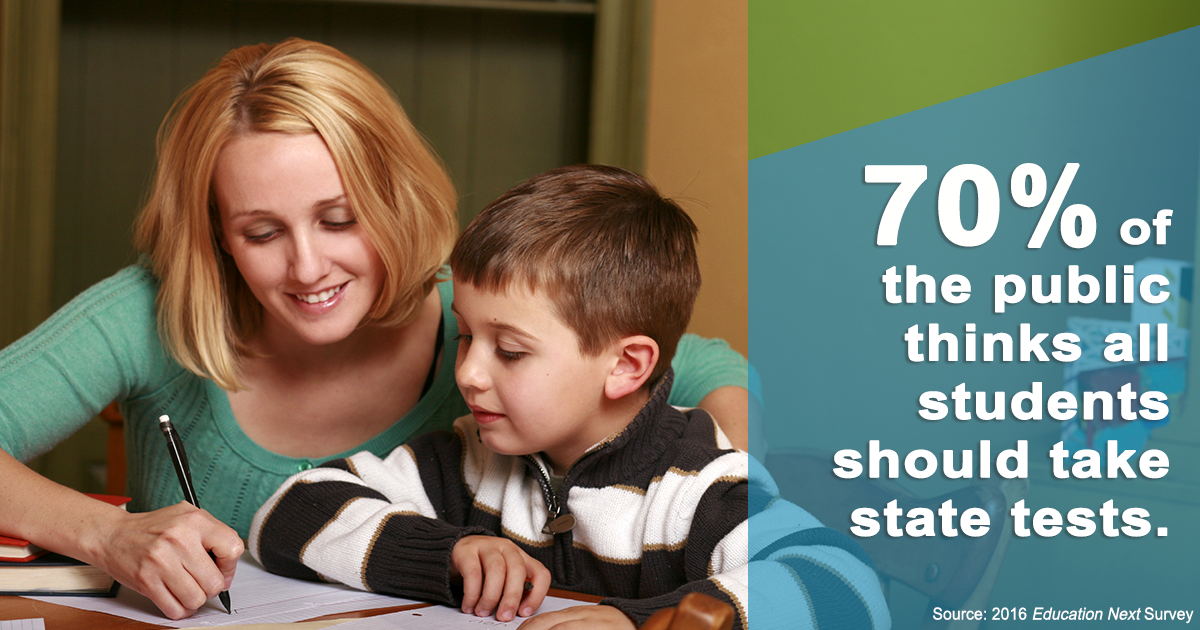 No matter what label policymakers attach to them, parents and educators support rigorous, consistent education standards that fully prepare students for the challenges of college and to compete in a global economy. Recognizing that reality, state leaders have moved past the rhetoric. The Every Student Succeeds Act has once and for all removed any doubt that states have full ownership of their education standards, and they are now developing accountability systems to ensure those systems meet their student needs.

No doubt, opponents will herald the findings from the Education Next poll and others like it as evidence that their states should change course and revert back to old models of education. But to do so would risk undoing the gains that are being made, and put students and teachers at a disadvantage. Now is the time for policymakers to double down on their commitment to high, comparable education standards, high-quality assessments and the success they are delivering.