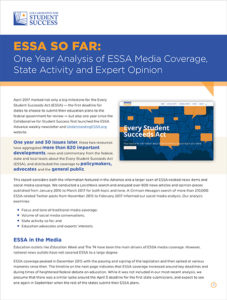 Over the past year the Collaborative for Student Success has been paying close attention to everything happening at the federal and state level around the Every Student Succeeds Act (ESSA) – as well as what experts and advocacy groups have been saying.

This spring we took a step back to examine the more than 820 developments we tracked over the past year in our ESSA Advance weekly newsletter and our site, UnderstandingESSA.org to get a sense of the conversation that’s been happening around ESSA..

Our analysis, “ESSA So Far: One Year Analysis of ESSA Media Coverage, State Activity and Expert Opinion,” looks at news coverage from January 2016 to March 2017 and social media coverage from November 2015 to February 2017. Here’s some of what we found:

The ESSA process is far from over – so we’re continuing to monitor coverage as states submit their ESSA plans, engage with stakeholders, and set their visions for education all students moving forward.

For more coverage of ESSA, check out UnderstandingESSA.org.