Many States Are Bringing Back Cursive Writing. Common Core Supporters Are Cool with That 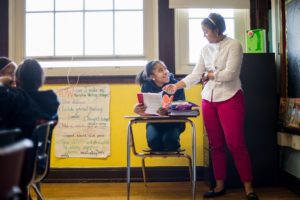 The Common Core State Standards are often incorrectly blamed for a decline in cursive instruction.

Last fall, the Today Show reported, “Many critics of the trend point the finger at the Common Core State Standards… The initiative requires ‘keyboarding skills,’ but doesn’t make any mention of cursive, prompting many school districts to limit or drop handwriting instruction.

Similarly, the Washington Post reports cursive handwriting is making a comeback from the brink of extinction—a brink, the article suggests, brought about by adoption of the Common Core State Standards. “Common Core Standards adopted by most states in recent years no longer required teaching cursive in public schools, and the widespread reaction was succinct: good riddance.”

But those implications, that Common Core State Standards discourage teaching cursive writing, are wrong. While the standards don’t explicitly require students to learn cursive, they in no way discourage it. And as states across the country have continued to build on the Common Core framework, many have reintroduced cursive requirements.

This year in Arizona, for example, state lawmakers introduced legislation to make cursive writing instruction a requisite in the minimum course of study, right alongside subjects like math and science.

According to the National Conference of State Legislatures, at least six states have passed legislation requiring cursive handwriting be taught, and at least 11 more were considering such a move earlier this year.

Such actions do not conflict with the letter of the Common Core. In fact, the standards are designed specifically to give states and districts the ability to make adjustments, like the inclusion of cursive handwriting, to ensure their students’ needs are met.

Common Core State Standards “were absolutely designed to allow states to tweak, amend and generally customize them in order to meet local needs,” Karen Nussle wrote last fall. “They are a floor, not a ceiling.”