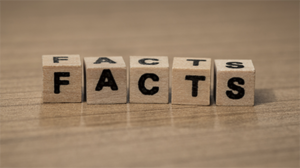 “Common Core is a disaster.”

In addition to asserting that they will both end Common Core as President of the United States (something numerous news outlets have clarified they simply cannot do), Donald Trump and Senator Ted Cruz have also both called the education standards a “disaster.” What Trump and Cruz mean by this is: even if you disagree with their fear mongering of Washington, D.C. brainwashing your children, the Common Core has somehow failed in its appointed goals.

So, for argument’s sake, let’s recap what the Common Core State Standards Initiative set out to do. Governors and state commissioners of education launched this effort in 2009 to ensure all students, regardless of where they live, receive an education that prepares them for college or entry-level careers. As a result, 43 states, D.C., four territories and the Department of Defense Education Activity (DoDEA) agreed upon, adopted and implemented a common set of academic standards that meet the college and career readiness benchmark.

So, where is this failure they speak of?

At least in the case of Mr. Trump (Senator Cruz has yet to articulate his rationale) the evidence of the standards’ failure is rooted in the United States’ ranking on international comparisons like the Programme for International Student Assessment (PISA). There are two problems with his claim that the nation’s current rank of 28th is evidence of failure.

First: the number 28 isn’t accurate. When announcing the 2012 Pisa Results which placed the United States at 27th (not 28th, but let’s not nitpick) in math and 17th in Reading out of 34 OECD countries, OECD Secretary-General Angel Gurría remarked that, “In addition, our analysis shows that US students often struggle with tasks that are cognitively demanding and which require complex mathematical thinking. These are the kinds of skills valued most by the Common Core State Standards for Mathematics (CCSSM)…”

Second: this rank is nearly identical to our nation’s positioning three years ago when states had just begun implementing Common Core. Go back to PISA results in 2009 and 2003, and you’ll find the United States ranked 25th and 23rd in math respectively. While these rankings are quite similar, you could certainly argue that the United States’ position has worsened over time.

The simple answer is, it’s not. In his 2012 statement, Secretary-General Gurría went on to say that “…the strict implementation of the Common Core State Standards for Mathematics (CCSSM) would undoubtedly improve PISA results.” Thus, the assertion that our current education standing amongst other developed nations can be attributed to the Common Core is baseless. Rather the education standards represent the possible solution to a problem over a decade in the making.

So instead of labeling the standards a “disaster” before they’ve have time to work (and boost those PISA rankings), Trump and Cruz should give them a chance.