The Common Core State Standards were designed to help all students achieve to high levels. And the authors of the standards made it clear from the beginning that all included our nation’s fastest growing population of students: English learners. Yet, some argue that certain populations of students can’t achieve to college-and-career ready levels. 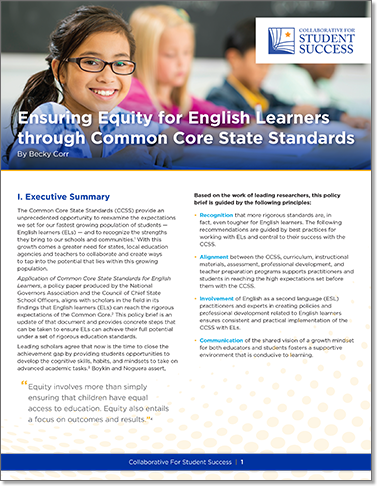 With that in mind, the Collaborative for Student Success is releasing a new policy brief, “Ensuring Equity for English Learners through Common Core State Standards.” The document is an update to a policy brief that was published alongside the Common Core when the standards were first released – with the benefit of almost 5 years of lessons learned through implementation. Written by ESL teacher Becky Corr, the brief outlines specific actions that can be taken at the state, district and school levels to help ensure  English learners can reach their full potential through implementation of the Common Core, including:

While these changes do not take place overnight, they are imperative for schools to ensure that all students are being given the same opportunities to succeed academically. As Corr notes, “English learners with a growth mindset, teachers who believe in them, and state-level systematic elements in place, can and will reach the rigors of the Common Core State Standards.”

States, schools and educators have an opportunity to tap into the “brainpower, energy and creativity” of English learners across our country by upholding high standards and rigorous expectations. Now is not the time to let those students down.