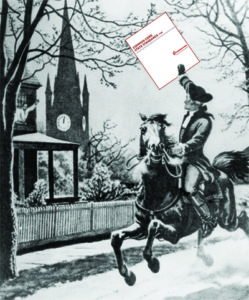 In a recent New Boston Post piece, Jennifer Braceras claims that the Common Core State Standards only teach students skills such as “how to cite primary sources to support an argument” and in so doing is damaging American history education in schools by not requiring “students learn about the birth of their country.”

Braceras’ observations are either completely misinformed or purposefully misleading (you be the judge) since Common Core only consists of ELA and Math standards. States (both those using and not using Common Core) develop their own history standards as they see fit.

Braceras claims: “Current Common Core [state] standards, adopted by Massachusetts in 2010, and much criticized for their new-fangled approach to math, do much damage to history education.”

As a result, Braceras’ claim that the “Common Core does not require that students learn about the birth of their country” is accurate – because doing so would be inappropriate for math and English Language Arts standards.

Each state has its own unique history that helped shape our national story, much like Paul Revere’s ride and the epic Battle of Concord, which is why there are no recommended history standards offered in the Common Core.

Massachusetts schools and educators in the state know how best to tend to its great history.

Here is what Braceras fails to mention:

Massachusetts’ history and social studies standards that Braceras lauds in her blog are still in place in the state. You can find them here.

Nothing needs to be brought back – the teaching of U.S. history hasn’t gone anywhere, especially in Massachusetts. And it won’t as Massachusetts continues to implement high standards.

Braceras claims: “Common Core demands only that schools teach skills, such as how to cite primary sources to support an argument.”

Fact:  If Braceras had in fact checked her primary source, the Common Core State Standards ELA themselves, she would discover that the only required reading found there are four seminal documents of U.S. history – the Declaration of Independence, the Preamble to the Constitution, the Bill of Rights, and Lincoln’s second inaugural address.

How could it be possible for Common Core to damage our American heritage by requiring students to read and analyze those texts for their “themes, purposes and rhetorical features”?

Adam Ezring is the Director of Policy at the Collaborative for Student Success.