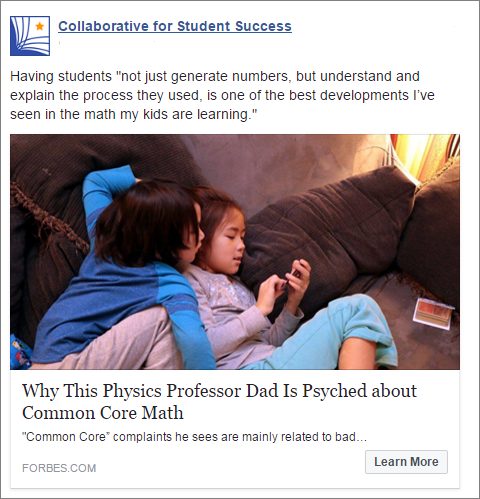 Last week on Facebook we shared a great piece that appeared in Forbes, written by a physics professor, Chad Orzel, who shared why he’s such a fan of Common Core math.

“As a professor of physics and a parent of two elementary-school students,” Professor Orzel wrote, “I really like what I see of the math my kids are learning in school.”

Having students “not just generate numbers, but understand and explain the process they used, is one of the best developments I’ve seen in the math my kids are learning,” he explained. This kind of learning, says Professor Orzel, will help develop  “a population of students who will make my life considerably easier when it comes to teaching introductory college-level physics.”

When we shared Professor Orzel’s piece on Facebook and it was met with almost 100 comments – including both support and skepticism. We were especially impressed by engagement from a number of people, including teachers and parents, who pushed back against skeptics and shared their positive thoughts and experiences with the math approaches being used in classrooms.

“Sorry folks, but common core math is ignorant and stupid. It’s comparable to walking outside, climbing up the porch post, crossing the roof, shinnying down the gutter on the opposite side of the house and crawling through the bedroom window, when all you had to do was walk from the living room through the bedroom door.”

“It’s mostly teaching you that you have the OPTION to go around… what if the living room was blocked? would you just stand there and look at it? or think of another method? at least in our school- that’s what they are teaching my daughters- how to think and solve problems in many different ways- and then the students get to use the methods best suited to the task at hand. plus they understand WHY all these options work- not just memorize the “do this get that result” facts….”

“I’m a math teacher and I LOVE the common core approach. It’s giving children multiple tools in their toolbox to pull out and use at their disposal. I have challenged people to use me if they are lost or struggling with common core math approaches and no one ever has. This isn’t even new math. Most of these methods used to be taught in school (a long time ago)… The standard algorithms are still taught but this way, the students get to learn WHY the algorithms work instead of just memorizing steps.

“There is an entire generation out here where people cannot do “basic” math, which necessitated the change in math standards.

“Just look on fb all those “only for geniuses” posts that are generally order of operations statements where way too many people get it wrong and swear up and down that they know their wrong answer is right. A big part of the reason is because they never learned the number theory/number sense that goes behind why the order of operations exist. If they had, they wouldn’t have to try to remember the stupid PEMDAS (this shortcut is part of the dumbing down of America I hear over and over), especially since remembering this makes people without the number sense think that multiplication comes before division and that addition comes before subtraction. Both of these statements are not accurate.

I just wish people would be more open minded and less afraid of change.”

Some parents shared their personal experience with Common Core math – and how they became fans of the approaches being used in classrooms after getting more familiar with it:

“At first I was negatively critical of common core, but as I watched my son learn math through common core, I began to learn how his grasp of mathematics is stronger than ours was at a young age – Especially having the ability to work math in his head, not just on paper. Americans need to accept the challenge of strengthening our education, not cry about it.

“I sat in on my 2nd graders math class. For the first time in my life i understand math.”

We have seen reactions like this before. In a Washington Post piece last year, Jay Mathews shared his surprise about how many parents thought they hated Common Core math until they took time to learn more. For example, this one parent from Washington State wrote to him:

“My first reaction to a Common Core worksheet was repulsion. It’s ugly math. It doesn’t look pretty or easy.” But she wanted her second-grade son to do well, so “I set that aside and learned how to do what he was doing. And something magical happened: I started doing math better in my head.”

While Common Core is often blamed for the unfamiliar math methods — in fact, lots of these methods weren’t created by the Common Core, they are actually methods that experts agree are strong approaches to helping kids to truly understand math concepts. Many parents are seeing how it’s helping their kids become more comfortable at math than they ever were. For example, Karrie shared:

“Totally love the way my daughter’s school teaches math now- SO many new options on HOW to process a concept- she is in 3rd grade, and a whiz at math now, because she can take a problem, break it down, and come up with one of a dozen new approaches to solving it! Go critical thinking skills!!!! (but yes, they are also learning some of the “old” ways- like counting by 5’s etc, and some times tables, etc… but more as pattern recognition than just pure rote memorization).”

Sheila Bowens still expressed concerns over the route students are being asked to take to answer questions:

“I understand exactly what’s going on in Common Core. However, I don’t like it. It takes you all around the world to get to the same answer. I can usually explain how to get the answer to my granddaughters but they won’t get credit because I didn’t use Common Core. Is there a textbook explaining this method?”

“It’s not a method, it’s a set of standards listing skills the kids should learn by grade level. One skill is learning alternate ways to get answers. You probably are familiar with one way and the kids are learning some alternates. It’s marked wrong because they aren’t showing mastery of the alternate technique. It’s not always about the final answer. Ask to borrow the textbook the school is using to learn some new techniques. The alternate techniques our school text teaches are great mental math shortcuts.”

But Dawn Singleton was still skeptical:

“Monica – If it is math why isn’t it about the final answer? two times two still equals four…no matter how you get there.”

Karrie and Monica both responded:

“because what we want the kids to know is the process/technique- which they can then use in ANY calculation….”

Math experts agree that these approaches to learning math are valuable – but that being said, we completely understand why some parents feel frustration around the approaches to math their children are learning in school. One of the parents who spoke positively about Common Core math on our post also expressed her dismay that there weren’t enough resources for parents in her school district:

“I will say though- as someone else posted, a class for parents in understanding the new lingo would be awesome (and for the record- my husband and I both have advanced degrees in science, and took a TON of math…. we just didn’t know the new terminology as she got started!)- especially since, at least at our school- they don’t bring a textbook home that has the concepts spelled out- only the homework workbook.”

Parents deserve resources and information from their schools about why these methods are being used and how they can help their kids with homework. There are resources out there to help parents: Learning Heroes, for one, has some great grade-by-grade math homework guides for parents looking to help their kids with math homework. Additionally, some schools are hosting parent math nights to help parents gain a better understanding of what’s happening in their students’ math classes.

In his piece, Orzel concluded: “I hope they keep [using these approaches to math] all the way through school, because it will make them better scientists or engineers (should they choose to go that route), and just better thinkers in general.”