When Common Core starts blowing up on Twitter, it’s usually the #PJNET bot at work.

Started by a for-profit religious group in Florida, the Patriot Journalist Network (PJNET) has users sign up and give the PJNET bot access to their Twitter accounts to post tweets that look like they were manually posted by users. Users can also pick from an archive of content on a variety of topics – including Common Core – to copy, paste, and tweet on their own.

Looking at these PJNET tweets, complete with graphics of children in jail, data mining imagery, and pictures of a sad neglected puppy, it’s hard to know what type of monstrous thing Common Core could possibly be, if you’re not already informed.

So what are the facts? Is Common Core that scary? Should we all be concerned?

Let’s take a look at some of PJNET’s “creative” tweets and see if we can provide some facts and clarity:

Question 1: What is Common Core? Is it a detention center? This looks bad! Let them out! 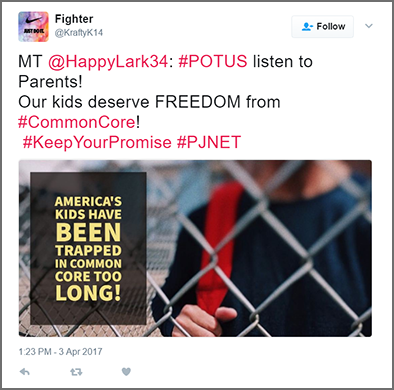 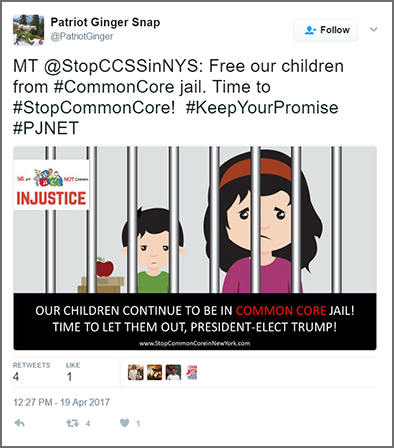 Question 2: I hear Common Core is a disaster? Is President Trump going to end it? Why hasn’t he yet? 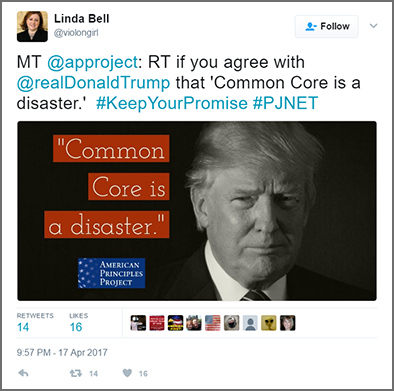 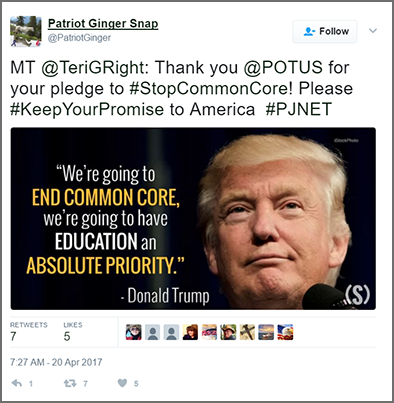 Yes, President Trump has referred to Common Core as a “disaster” many, many times.

But results from last year’s state tests show that students in states that use high standards like the Common Core made significant improvements in math and English language arts. Younger students, who have had more exposure to the higher standards, are getting better at math and better at reading.

So while Common Core may have had a rocky start during the implementation process as states, districts, schools, teachers, and students transitioned to higher standards, these findings suggest Common Core is far from a disaster – and in fact, it’s helping more students achieve to higher levels.

But disaster or not – there’s not much President Trump can do about Common Core. And by not much, we mean nothing (without it being some serious federal overreach). States choose their standards, not the federal government. The Dept. of Education, or the White House telling states that they better get rid of Common Core “or else” would be a violation of the Every Student Succeeds Act and states’ rights. And nobody wants that!

Question 3: Why is Common Core mining data from my kids’ brain and threatening my kids’ privacy? How am I going to sleep at night? Make it stop. 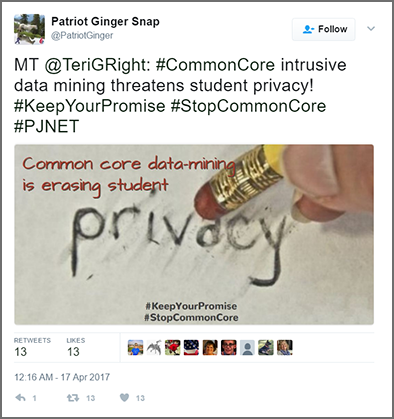 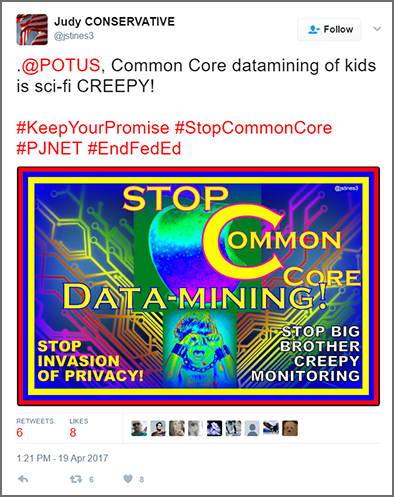 Data mining? Yikes! But again, Common Core is literally just a set of academic standards. You can read them here. That’s all they are. There is no data-mining happening. Even if a state stopped using Common Core, the state’s data collection and privacy would remain 100% unchanged.

P.S. Fun fact: federal and state laws explicitly prohibit schools and institutions from releasing personally identifiable information that could jeopardize a child’s privacy. These laws ensure that only parents or a legal guardian can access their child’s academic records.

Question 4: Does Common Core remove 50% of classic literature in elementary grades? And 70% in high school? That sounds boring for kids! 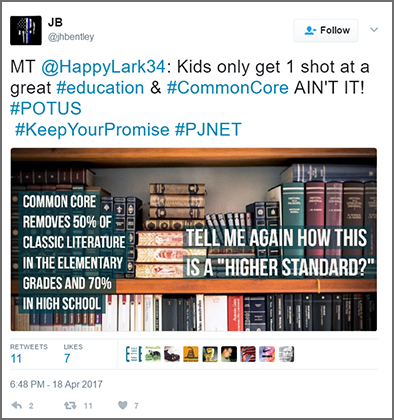 First of all – Those percentages do exist in a table in the standards but are clearly labeled that the “percentages on the table reflect the sum of student reading, not just reading in (English) settings.” The standards dispel this myth on their own: “Teachers of senior English classes, for example, are not required to devote 70 percent of reading to informational texts. Rather, 70 percent of student reading across the grade should be informational.” As Politifact explains, “those percentages also count what students read in their science, math and history classes — which would likely be all, or nearly all, informational.” So fear not! Literature remains alive and well in classrooms!

P.S. The standards only require students to read four texts: Did you know that the Declaration of Independence, the Preamble to the Constitution, the Bill of Rights, and President Lincoln’s Second Inaugural Address. Other than those four documents, local school boards and educators decide what materials are used in their state’s classrooms – not the Common Core.

Question 5: Is Common Core developmentally inappropriate? Aren’t kindergarteners supposed to play? And color? Does Common Core get rid of recess? What’s the world coming to? 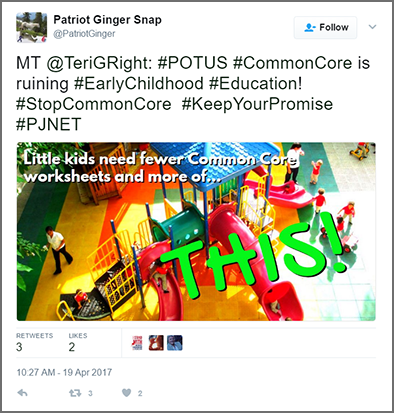 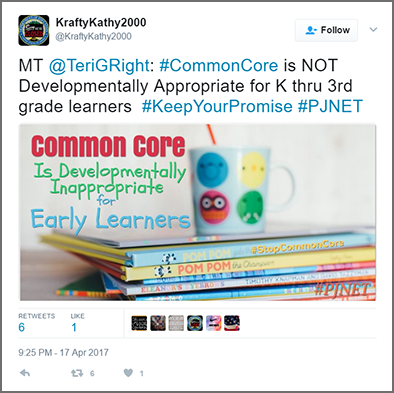 Saying Common Core pushes learning at the expense of fun and playing is a completely false narrative.

Early-grade skills outlined by states’ standards, like knowing the alphabet or counting to 100, “can and should be accomplished through joyful, playful rhymes, songs and physical games,” David Liben, a former principal, wrote in the New York Times.

Question 6: In Common Core math, is the right answer the wrong answer? Does 2+2 still equal 4? Why can’t parents help their elementary school kids with their math homework? Bring back normal math! 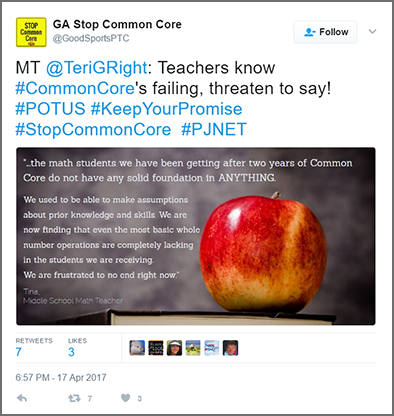 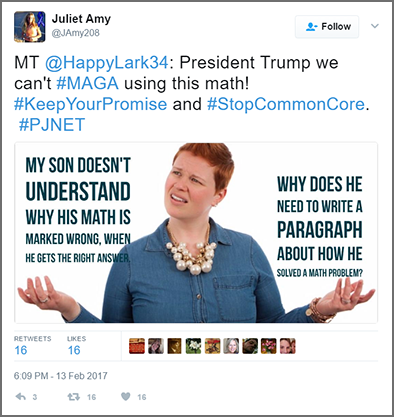 Math is math. It didn’t go anywhere! 2+2 still equals 4. Common Core Math Standards encourage multiple approaches to solving problems so that kids can how to find the answer, not just what the answer is using methods they don’t fully understand. Parents see homework assignments that have kids taking unfamiliar steps to find the answer to a multiplication problem that could be solved quickly using “traditional methods.” But don’t worry, kids are definitely still learning math the way their parents did, but they’re also learning other approaches so that they can think about what “carrying the 1” really means!

P.S. Not only are math scores increasing for students who have had Common Core math their entire academic career, but teachers are seeing kids come into their classes with a better understanding of math, too. Check out this example. 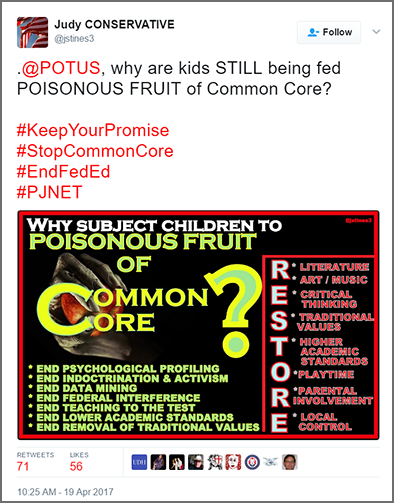 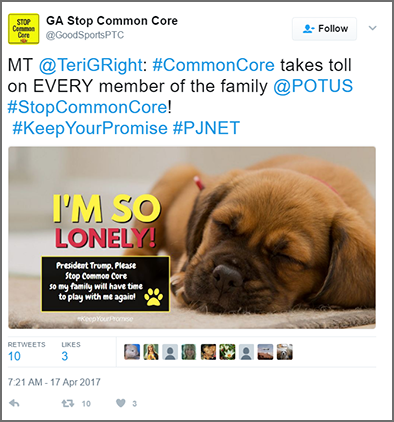 If you’re still concerned – after all we shared above – we’re happy to break it down again.

Common Core is JUST math and English standards. That’s it.

While the standards are important, they do not have the power to indoctrinate students, mine data, or remove “traditional values.” And they are certainly not lower academic standards (Don’t believe us? The experts agree!).

As far as the list of items to restore, Common Core supporters like all of those things too! High standards, critical thinking, parental involvement and local control are just a few of the reasons why parents, educators, and policymakers across the country support the Common Core. They are important. We’re on the same page.

Now, let’s talk about the puppies. Everyone loves puppies. Including us. And no puppies were harmed by high academic standards.